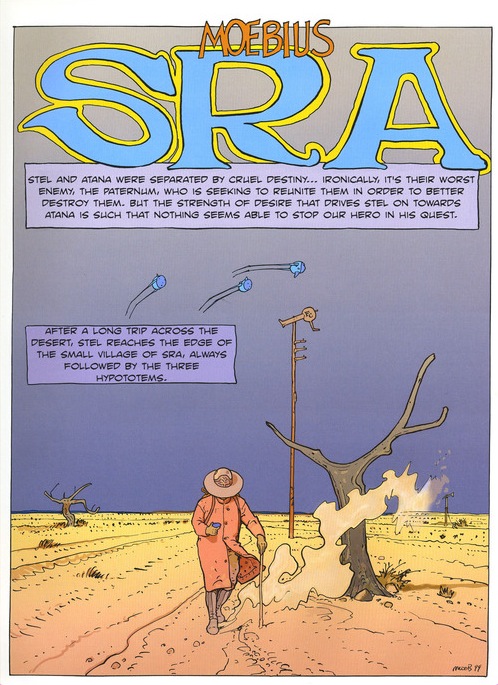 The French graphic novelist and comics legend was like a pervy psychedelic Zelig: He launched the French predecessor of trippy “mature audiences only” comics mag Heavy Metal, Métal Hurlant. Collaborated with Jodorowsky and Michael Moorcock. Did storyboards for Alien, Tron, Willow, The Fifth Element and on and on. His best work — see the Arzach series for starters, or my personal favorite, his “Crystal Portfolio” — is sort of like all the high desert psychedelia parts of Star Wars minus George Lucas’ bummer-nerd trip, or maybe Frank Herbert’s Dune if he’d gone native down in Mexico.

Much of his best work was brought to America by Marvel’s edgy Epic imprint in the late ’80s, and while currently out-of-print these volumes are widely circulated by well-meaning preservationists online.

Perhaps not surprisingly for such a secretly influential cult sci-fi genius, there are many, many people on the internet who are far more knowledgeable about the man than anyone here on the ID Music campus. One such person is Ian McEwan, the curator of a massive Tumblr-based archive of Moebius’ work, Quenched Consciousness. He’s currently posting the 2001 series, Sra, in a previously unknown fan-translation, and what sounds like the only English-language version available. From QC:

Sra is the final book in Moebius’ great Aedena Cycle series. It directly follows Stel, the fourth book(which you can read here if you haven’t or need a refresher), and has never been translated to English. Well after a weird set of circumstances, I happened to find one that someone made, I don’t know who, but it’s a rather good one. There are a few moments of grammatical awkwardness, but they’re pretty minimal. I’ve gone over this many times, comparing it to my physical French edition, and it’s totally legit as far as overall plot/content/dialogue. The real deal.

QC has also included the rest of the Aedena Cycle in his archive, and he seems to think it’s a good place to dive in: “I personally think these are Moebius’ opus and, along with his Airtight Garage strips, display the purest distillation of the man’s work.” Start here with 1983’s “Upon a Star.”

Moebius died in March of 2012, and there’s an excellent obituary and survey of his work at The Comics Journal.