Best part of waking
up is Raga Bhairavi
in these headphones, dude

… haiku in the style of @revoltoftheapes.

Preparing for next week’s February edition of Inter-Dimensional Music on Marfa Public Radio, navigating raga headspace with the help of Tawfiq and Tanarang. Of all our recent discoveries, Raga Bhairavi is perhaps the most enchanting, and has now become part of our regular morning routine at the Indianapolis Zen Center. From Tanarang’s raag index …

Any one who claims to know or appreciate music cannot be unaware of the queen of melodies i.e. Raag Bhairavi. The soft (Komal) notes and their smooth rendering with pleasing touches – Khatke, Jhatke and Murkiyan simply mesmerizes the audience. A pleasant sobering atmosphere full of love and piety is created and one feels so close to the Supreme. Its compositions include several Thumris, Bhajans, Ghazals, Songs etc. Since it is an ocean of immense possibilities the melodic combitions can include all the twelve notes with skill. 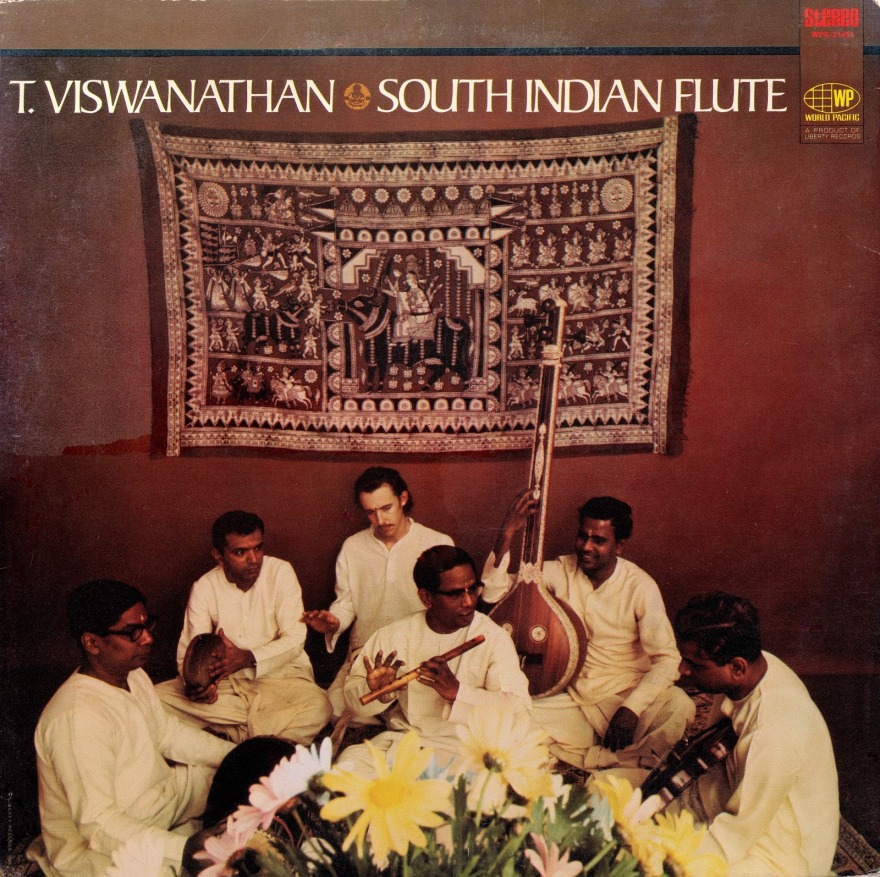 Renditions from flute specialists such as Pannalal Ghosh and Tanjore Viswanathan are highly recommended: An ideal complement to John‘s coffee and morning practice. Tune in to ID Music on Marfa Public Radio this Sunday, February 5 from 9-11pm CT for more. 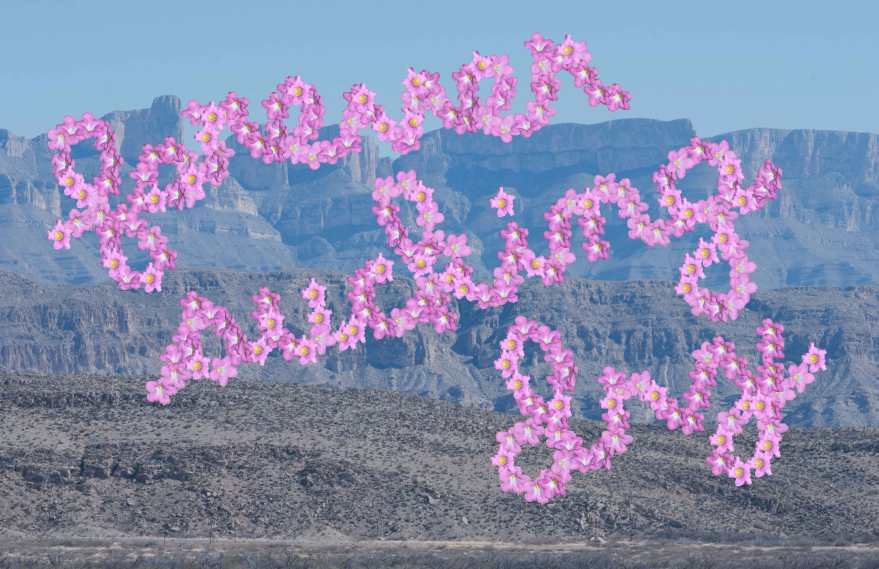 Forever Sucking Dry, my cetacean-mind-communion soundtrack to Ballroom Marfa’s Desert Surf Films series from August is now streaming. Many thanks to Travis Bubenik and Gory Smelley for help recording and editing the mix for broadcast. The setlist includes songs from Aloha Spirit, Emeralds, Former Selves, These Trails, Buffy Sainte-Marie and more, underscored by surf ambience, whalesongs, and a cameo from Magaret Howe and her dolphin lover, Peter.

You can find an 11” x 17” print of the Forever Sucking Dry image as the centerfold ofStay Golden, a desert surf films ‘zine designed and edited for Ballroom Marfa by Hilary duPont, Liz Janoff and Ian Lewis. Available for $10 (cheap!) from Ballroom Marfa. The ‘zine also includes prose, poetry and artwork from Joshua Edwards, Tim Johnson, Eileen Myles and Brandon Shimoda.

You can also keep in touch by subscribing to our bi-monthly newsletter: Click here to view the archives.

And music from the show is readily available on our Bandcamp and Soundcloud pages. Thanks for listening!

Inter-Dimensional Music returns with the Big Bend’s Number One broadcast of white magic and black metal tonight, February 1, 2015. If you’re out here in Far West Texas tune in from 9-11p (CST) on the first Sunday of each month at KRTS 93.5 FM in Marfa, KRTP 91.7 FM in Alpine and KDKY 91.5 FM in Marathon. You can also stream the show live at marfapublicradio.org, and find archived sets on Soundcloud.

In the first hour we’re going to relive our late ’90s turn as a Los Angeles rave reporter for techno/hip-hop magazineURB by sifting through the trove of tracks that Aphex Twin released earlier this week. The deluge of new music triggered a massive serotonin rush in listeners of a certain age, for whom AFX represents a kind of ideal synthesis of hip-hop’s low-end thump, slinky earworms, Eno-esque ambient glide, and Throbbing Gristle-worthy transgression.

A quick summary of why some people are very excited: Richard D. James hadn’t released any new music since 2001’sDrukqs. He emerged with three new things in the past year: A single copy of a mostly unheard 1994 album of spastic breakbeat, Caustic Window, sold at auction for $46,300 to the guy who created Minecraft; an immediately beloved new album called Syro; and then a trickier EP, Computer Controlled Acoustic Instruments pt2. Arrival of said music was heralded, in part, by the appearance of an Aphex Twin blimp in the skies over London.

Last week the ever-vigilant AFX superfans who scour the internet for any sign of the wily musician discovered aSoundcloud user who was uploading songs that sounded a lot like classic Aphex Twin. Word spread, obsessive fans debated their authenticity on message boards, and as the user48736353001 account posted more and more music aconsensus emerged that these were the real deal. Those listeners of a certain age began to rejoice as the catalog of new-old music grew to 110 songs. For some perspective, imagine if D’Angelo followed up on Black Messiah by giving away eight albums of top-shelf unheard material from his decade of silence.

The prankish nature of the release made it seem even more intimate, as the user now assumed to be the man himself cracked wise and offered inebriated philosophy in the comments …  END_OF_DOCUMENT_TOKEN_TO_BE_REPLACED 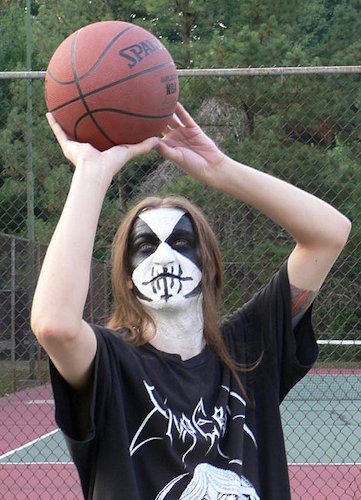 As the Darkness creeps over the Northern mountains of Marfa
and the silence reach the woods, I awake and rise…
Into the night I wander, like many nights before,
and like in my dreams, but centuries ago.

Some original poetry submitted in response to the ID Music vs. Rockpile Inna Halloween Style blasphemous metal broadcast from 10/30/2014 (via MarfaList)

Posted on August 3, 2014August 3, 2014 Posted in Inter-Dimensional Music, KRTS, Marfa1 Comment
Inter-Dimensional Music, the Big Bend’s longest running New Age + Cosmic Metal radio program returns this Sunday, August 3 from 9-11pmon Marfa Public Radio
In the 9 o’clock hour we’ll be playing new music from friend and former Marfa-dweller Celia Hollander (aka $3.33) alongside gentle drones from Ashan plus a mysterious nugget of jingle-jangle psychedelic goodness by William Whichman. Our thanks to Matthew in Denver — New Age tape collector and friend of the show — for the hook up.
Things turn choogly from 10-11pm as cosmic metal riddims commence. This month we’re looking at the psychoactive ecological system seeded by the band Sleep, playing brand new music from the venerated Hasheeshians themselves, alongside the kindred mystical heaviness of Yob, Om and the Wackies Rhythm Force.
If you’re out here in Far West Texas tune in from 9-11p (CST) on the first Sunday of each month at KRTS 93.5 FM in Marfa, KRTP 91.7 FM in Alpine and KDKY 91.5 FM in Marathon. You can stream ID Music live at marfapublicradio.org
We are also available by computer at interdimensionalmusic.com and bandcamp.com/interdimensionalmusic.
Also! If you find yourself out here on the high desert grasslands, ID Music host Daniel Chamberlin’s Swale + Blossom installation is on view for the rest of August at Mary Etherington, 124 E. El Paso in Marfa, Texas. More info here.
Posted on July 6, 2014 Posted in Inter-Dimensional Music, KRTS, MarfaLeave a comment

The #1 New Age radio broadcast in the Big Bend of Far West Texas returns to the airwaves tonight from 9-11pm CST — that’s right now — with monsoon conjuring music from Valet, Aerial Jungle, Softest and J.D. Emmanuel. In the second hour we’ll be exploring the outer limits of “blackened New Age” with music from Agalloch and Ash Borer, the latter hot off their Marfa debut to a confused crowd at Padre’s last week.

Cosmic metal is the yin to the New Age yang. Both are musics concerned with other worlds, with direct contemplation of mortality and open recognition that we dwell in a fallen realm. Matters of the material sphere are of less concern than an internalization of the ways in which darkness and light, north and south, sun and moon, stupor, enlightenment, endarkenment, sex and magick are undeniable drivers of the undulating trance that throbs throughout all consciousness. And a shared recognition that maximum volume will yield maximum results.

Transcendence and descendence are both expansions from a middling plane of existence.

In the interest of drawing attention to the occult spiritual continuum between these schools of thought — and in some cases, finding ground with fellow travelers in heavy electronic music — Inter-Dimensional Music offers the following catalog of artists who fall within our purposely abstract terminology, thus … 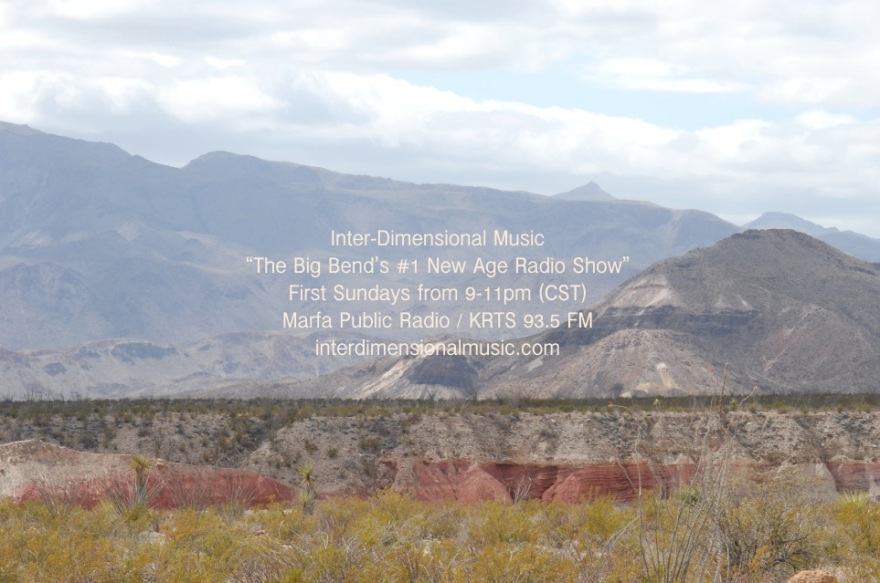 Our summer doom mantra mix includes some heavy contemplative music from Ben Frost, Sunn O))) & Ulver, and Leyland Kirby. A high altitude chill descends as the sun fades and bats swoop through the twilight: Look for XYR, M. Geddes Gengras and Laraaji in the second hour.
Tune in from 9-11pm (cst) at 93.5 FM here in the Big Bend, or worldwide at marfapublicradio.org.